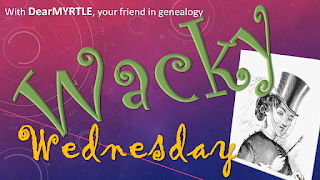 Cousin Russ and Myrt had committed to doing one hangout per month spotlighting various indexing options, and true to form, this session had it's challenges.

Apparently "small batch" entries are single image items that may have challenged indexers and arbitrators alike. Indexers were cautioned to read the project's specific directions, found on the lower right portion of the indexing software screen. As one types and tabs to the next field, the help info changes - so it's context sensitive.

In one batch, the town name of Black Hawk had be mistyped on a delayed birth certificate as 'Blackhawk.' Specific instructions for this project stated not to correct the spelling of a location if known. Several of tonight's viewers noted they had be instructed to correct spelling, but on a different project.

So apparently rules for indexing something as simple as the spelling of a town in the 20th century can vary from project to project.


Check the DearMYRTLE Hangouts Calendar for upcoming study groups and hangouts. There you'll find links to the GeneaConference (in-person) and the GeneaWebinars Calendar with over over 200 hours of online genealogy classes, webinars, live streams and tweetchats from other hosts and presenters over the next 12 months.

Posted by DearMYRTLE at 8:37 PM