Every Friday we're pleased to offer Legacy Family Tree Webinar subscribers a new bonus webinar just for them! This Friday enjoy "Over the Top: Researching Canadians in the First World War" by Michael L. Strauss, AG.

Over the Top: Researching Canadians in the First World War

Canada would play a prominent role in the First World War, then a part of the British Empire in 1914. When Great Britain declared war on Germany on August 4, 1914 the war would automatically involve Canada the following day. This lecture focuses on records of the Canadian Expeditionary Forces; including the C.E.F. personal files, Commonwealth grave registry, Regimental Nominal Rolls, and American’s fighting for Canada during this conflict and other records of the Royal Navy and Marines. 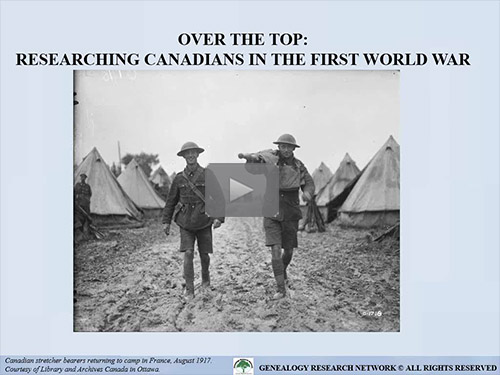 Michael L. Strauss, AG, an Accredited Genealogist and forensic investigator, is a native of Pennsylvania and a resident of Utah. He holds a BA in History and is a United States Coast Guard veteran. He is a licensed Private Investigator and qualified expert witness in Surrogate Court and Circuit Court in Pennsylvania, New York, New Jersey, and Virginia. Michael is an approved genealogist with the United States Army to locate DNA qualified persons MIA from Korea, Vietnam, and World War II. He is a national genealogical lecturer and instructor for military courses at the Institute of Genealogy and Historical Research (IGHR), and Virtual Institute of Genealogical Research (VIGR). He was the film historian for the 2015 Academy Award nominated movie "Finding Vivian Maier".
See all the webinars by Michael Strauss in the Legacy library.
Not a member yet?Legacy Family Tree Webinars provides genealogy education where-you-are through live and recorded online webinars and videos. Learn from the best instructors in genealogy including Thomas MacEntee, Judy Russell, J. Mark Lowe, Lisa Louise Cooke, Megan Smolenyak, Tom Jones, and many more. Learn at your convenience. On-demand classes are available 24 hours a day! All you need is a computer or mobile device with an Internet connection.
Subscribe today and get access to this BONUS members-only webinar AND all of this:
It's just $49.95/year.
Posted by Legacy Family Tree at 7:51 AM