Join us on November 23 & 24 for a two day intensive on Researching British Military Ancestors. Our presenter is British Army expert Paul Nixon. Paul is our Military columnist for British Connections and is also the military expert at Findmypast. 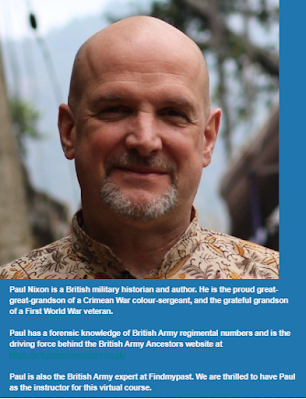 This two-day conference will examine the role our British ancestors played in the service of their monarch and country. This will look at service between 1760 and 1945, with the main focus on the British Army between 1870 and 1945.

Day 1 will begin with an overview of the topics to be covered and what survives online and offline. Two sessions will be dedicated to service at sea and service in the air, before we move on to the British Army.

2. My ancestor served on the water

3. My ancestor served in the air

4. My ancestor served on the land

Day 2 will focus entirely on service in the British Army: how the army evolved, how it was organized, how we can be smart in using surviving source material to inform us about soldiers’ services.

6. The component parts of the British Army Regulars

7. Piecing together the jigsaw

Case studies will be referenced throughout the two-day event. All presentations are being recorded and will be available for one month following the live event.
To register:  https://www.isbgfh.com/Military-Research-Virtual-Institute

Posted by Christine Woodcock at 6:13 AM