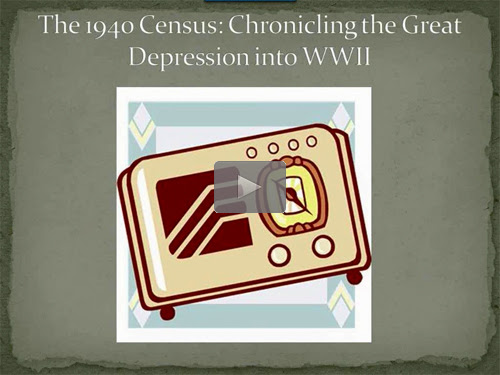 The 1940 Census was released to the public on April 2, 2012. Nine out of every ten Americans has a relative in the census. First enjoy a brief history of the U.S. census and learn of the differences in the 1790-1840, 1850-1870, and 1880-1930 census records. Then, learn about the social history - what was going on at the time of this census, and get an in-depth look into the information you can find. Finally, learn what to do if you cannot locate your ancestor in the indexes.
How to view:
If you are an annual or monthly webinar subscriber, this webinar's recording is now available in the Webinar Library. Just head over to the library, login, and enjoy! Two pages of supplemental syllabus materials also accompany this webinar.
Click here to watch the webinar.
If you are not yet a webinar subscriber...when you join as an annual or monthly subscriber you, too, will have access to these bonus members-only webinars. This is the twelfth we've added since January. Take a look at all of these benefits:
For more information, or to subscribe, click here.
About the presenter

Michael Brophy is a nationally known, professional genealogical researcher, heir search specialist, and lecturer from the Boston area. He has served as Program Director and Publicity Director for the Massachusetts Genealogical Council. He was the first Treasurer of the New England Association of Professional Genealogists. Mike earned an MBA degree from Suffolk University and a BBA from the University of Massachusetts at Amherst. Mike was featured on the Irish TV series Dead Money, a genealogy TV show about heir searchers. In 2010, Mr. Brophy was hired to conduct research for the NBC television program Who Do You Think You Are?, on an episode dedicated to the family history of actress Gwyneth Paltrow. He has lectured on a wide variety of genealogy subjects at the National Genealogy Society’s Annual Conference in 2014, 2012 and 2011. He specializes in New England and Irish genealogy subjects. His genealogy education includes seven certificates from the Institute of Genealogy and Historic Research (IGHR) and certificates in Private Investigation and Advanced Forensic Genealogy from Boston University.
Click here for all of Michael's webinars.
Posted by Geoff at 12:15 PM