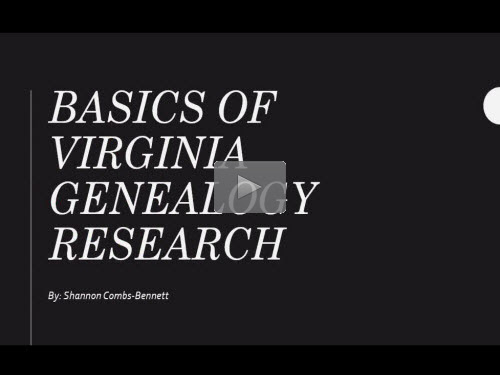 The recording of today's webinar, "The Basics of Virginia Research" by Shannon Combs-Bennett PLUS the after-webinar party is now available to view for free for a limited time at www.FamilyTreeWebinars.com.
If you are new to Virginia research, or simply need a refresher of the Old Dominion State, this is the webinar for you. Learn about its history, records and repositories as well as learning some valuable tips for researching there. Yes, there will be suggestions on how to work around those pesky burned counties in addition to African and Native American research.
View the Recording at FamilyTreeWebinars.com
If you could not make it to the live event or just want to watch it again, the 1 hour 44 minute recording of "The Basics of Virginia Research" is now available to view in our webinar library for free for a limited time. Or watch it at your convenience with an annual or monthly webinar membership.
Coupon code
Use webinar coupon code - virginia - for 10% off anything at www.FamilyTreeWebinars.com or www.LegacyFamilyTreeStore.com, valid through Monday, January 25, 2016. 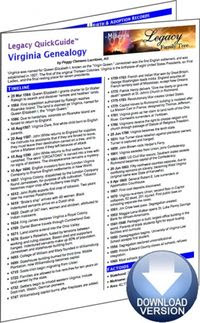 Legacy QuickGuide: Virginia Genealogy - 2.95
Looking to find those elusive Old Dominion ancestors? The Virginia Genealogy Legacy QuickGuide™ contains useful information including a timeline of Virginia history events, tips on Virginia research strategy, outline of major immigrant groups, and more. Also included are links to websites and resources covering vital records, church records, census records, as well as general Virginia resources. This handy 7-page PDF guide can be used on your computer or mobile device for anytime access.Virginia was named for Queen Elizabeth I, known as the “Virgin Queen.” Jamestown was the first English settlement, and was established in 1607. The first of the original Thirteen Colonies, Virginia is the birthplace of eight United States Presidents, six First Ladies, and the final resting place for seven presidents.