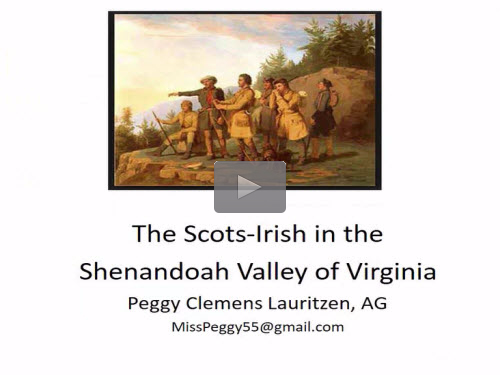 The recording of last night's webinar, "The Scots-Irish in America" by Peggy Clemens Lauritzen is now available to view for free for a limited time at www.FamilyTreeWebinars.com.
Many Americans can trace their ancestry back to the British Isles. Some have even heard that their background was “Scotch-Irish”. We will focus on who these people were and where they came from in the British Isles.
View the Recording at FamilyTreeWebinars.com
If you could not make it to the live event or just want to watch it again, the 1 hour 19 minute recording of "The Scots-Irish in America" is now available to view in our webinar library for free. Or watch it at your convenience with an annual or monthly webinar membership.

Digital Download
This webinar recording is available as a digital download for just $9.95. It includes the .mp4 and the syllabus for one low price. Click here to purchase. Or, subscribe for a month or a year and also have access to the recording and handouts for the duration of your membership.
Coupon code
Use webinar coupon code - irish - for 10% off anything at www.FamilyTreeWebinars.com or www.LegacyFamilyTreeStore.com, valid through Monday, February 15, 2016.
Webinar Memberships/Subscriptions
Webinar Members get:
Introductory pricing:
Click here to subscribe.
Register for our upcoming webinars (free)
Click here to register.
Print the 2016 webinar brochure here.
See you online!
Posted by Geoff at 10:09 AM