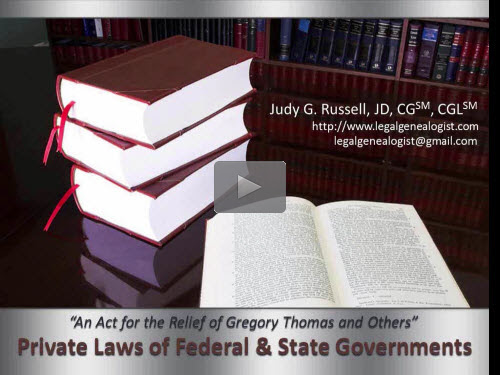 Black's Law Dictionary on CD, 1st edition (1891) and 2nd edition (1910)
Every genealogist, regardless of their time and place of interest, must have a copy of Black's Law Dictionary in their library. Legal terminology differs from place to place and time to time, and successful genealogical research depends on the clear understanding of this changing terminology.The publishers of Black's Law Dictionary are now producing their eighth edition, and the newer editions have added information on the developments in the law in recent decades. But for genealogists the earlier editions retain their value, since they have a higher proportion of information on older law, especially the English feudal law, which is essential for the interpretation of documents from the American colonial period and from the England that the colonists left.While these volumes contain just the sort of legal verbiage that one would expect, there are many other reasons for consulting these volumes. Terms from legal Latin and legal French are included, as well as words and phrases from Scottish and Welsh law. There are dozens of Latin and French terms of kinship, which appear in older wills and lawsuits. There are definitions from the lexicon of agriculture, such as "treet," meaning fine wheat, and "tremesium," meaning the season or time of sowing summer corn. And much more.In the second edition, also included here, Black included more citations to law reports and case law, in support of his definitions, and also added many more terms of medical jurisprudence.
Click here to purchase for just $29.95.
Webinar Memberships/Subscriptions
Webinar Members get:
Introductory pricing:
Click here to subscribe.
Register for our upcoming webinars (free)
Click here to register.
Print the 2016 webinar brochure here.
See you online!
Posted by Geoff at 2:36 PM