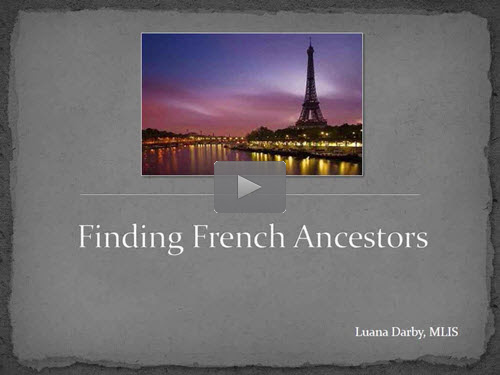 The recording of today's webinar, "Finding French Ancestors" by Brian Donovan is now available to view for a limited time for free at www.FamilyTreeWebinars.com.
Webinar Description
From Alsace-Lorraine to Paris and Huguenots to nobility, discover key resources for French research and techniques to meet challenges on both sides of the ocean.
View the Recording at FamilyTreeWebinars.com
If you could not make it to the live event or just want to watch it again, the 1 hour 31 minute recording of "Finding French Ancestors" is now available to view in our webinar library for free for a limited time. Or watch it at your convenience with an annual or monthly webinar membership.

French Genealogy Research - 3.95
We start with a couple of interesting facts: 8.3 million Americans (3% of the total population) claimed French ancestry in the 2000 U.S. census, and 2.4 million Americans (0.9% of the population) claimed French-Canadian ancestry. Thus, with over 10 million Americans of French origin, this research guide was almost inevitable, and in trueGenealogy at a Glance fashion, it lays out the basic elements of French research in just four pages, boiling the subject down to its essence and allowing you to grasp the fundamentals of French genealogical research at a glance.
Consisting of Huguenots, Acadian refugees, and political exiles, the French contingent in America has always been viewed as a distinct element in the population, concentrated for the most part in Louisiana, New England, and the Midwest. Connecting these individuals to France and tracing them back through the earliest records, is the particular challenge of this research guide.
French research, we learn, starts with the vital records of birth, marriage, and death. These records fall into two categories: parish registers before 1792 and civil registrations after 1792. Because most records used initially in French research were created at the town level, identifying an ancestor’s town of origin is critical. Once determined (with tips given here to make it easier), research is generally conducted in the rich collections of departmental archives, including notarial records and censuses that are gradually being digitized and placed online. Municipal archives and libraries are rapidly digitizing their records as well, and the final section of this paper concludes with a list of helpful websites. The four specially laminated pages of this work are designed to provide as much useful information in the space allotted as you’ll ever need. No research tool in French genealogy is as effortless and as convenient.4 pages | Published 2012 | PDF Edition
Click here to purchase for 3.95.
Webinar Memberships/Subscriptions
Webinar Members get:
Introductory pricing:
Click here to subscribe.
Register for our upcoming webinars (free)
Click here to register.
Print the 2016 webinar brochure here.
See you online!
Posted by Geoff at 2:25 PM