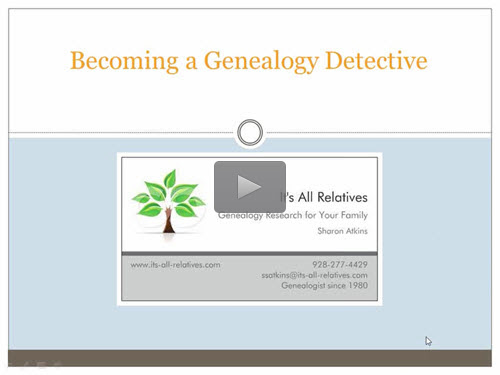 The recording of today's webinar, "Becoming a Genealogy Detective" by Sharon Atkins is now available to view at www.FamilyTreeWebinars.com for free for a limited time.
Webinar Description
Chances are, if you have spent any time at all working to compile your family history, you have run into difficulty finding at least one elusive relative & maybe even several of them! Within the genealogy community this experience is commonly referred to as a "brick wall." Some of brick walls may seem impossible to solve, today. However, as my mother often told me, "Nothing in life is impossible, some things just take a little longer to accomplish than others." Learn how to approach and solve seemingly complex problems by becoming a "Genealogy Detective".
View the Recording at FamilyTreeWebinars.com
If you could not make it to the live event or just want to watch it again, the 1 hour 47 minute recording of "Becoming a Genealogy Detective" PLUS the after-webinar party is now available to view in our webinar library for free for a limited time. Or watch it at your convenience with an annual or monthly webinar membership.
Webinar Memberships/Subscriptions
Webinar Members get:
Introductory pricing:
Click here to subscribe.
Register for our upcoming webinars (free)
Print the 2017 webinar brochure here.
See you online!
Posted by Geoff at 2:44 PM