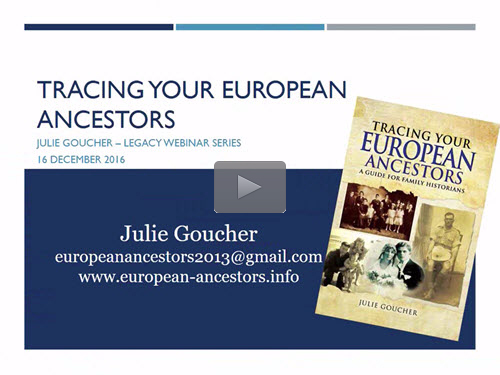 The recording of today's webinar, "Tracing Your European Ancestors" by Julie Goucher is now available to view at www.FamilyTreeWebinars.com for free for a limited time.
Webinar Description
A broad overview of research in Europe - a continent spanning more than thirty countries which has been subjected to wars, political unrest and border changes. Europe is a Continent with different languages, cultures and religions, all of which play a part in family history research. This presentation looks at the obstacles and pitfalls a researcher may encounter, and the major historical events & those that have had a marked effect on family history & are identified, especially the impact of the world wars and regional conflicts, border changes and movements of populations. Advice on broadly available sources is also discussed.
View the Recording at FamilyTreeWebinars.com
If you could not make it to the live event or just want to watch it again, the 1 hour 38 minute recording of "Tracing Your European Ancestors" is now available to view in our webinar library for free for a limited time. Or watch it at your convenience with an annual or monthly webinar membership.
Webinar Memberships/Subscriptions
Webinar Members get:
Introductory pricing:
Click here to subscribe.
Register for our upcoming webinars (free)
Print the 2017 webinar brochure here.
See you online!
Posted by Geoff at 2:27 PM