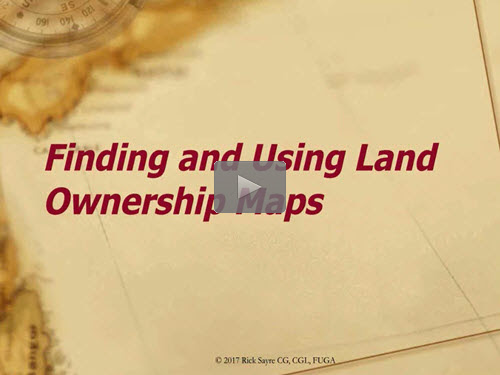 The recording of today's webinar, "Finding and Using Land Ownership Maps" by Rick Sayre, CG, CGL, FUGA is now available to view at www.FamilyTreeWebinars.com for free for a limited time.
Webinar Description
Land ownership maps in the United States are generally focused on the county level. Produced largely in the nineteenth-century in single sheet or atlas format, they were sold by subscription and also developed to commemorate events such as the centennial of the American Revolution. Though advances in printing such as lithography increased availability, maps were still expensive. Consequently, they likely will be found in more affluent areas. Property owners can also be found on military maps and other government published maps. Land ownership and residence can often be determined by correlating city directories with fire insurance maps.
View the Recording at FamilyTreeWebinars.com
If you could not make it to the live event or just want to watch it again, the 1 hour 46 minute recording of "Finding and Using Land Ownership Maps" PLUS the after-webinar party is now available to view in our webinar library for free for a limited time. Or watch it at your convenience with an annual or monthly webinar membership.
Webinar Memberships/Subscriptions
Webinar Members get:
Introductory pricing:
Click here to subscribe.
Register for our upcoming webinars (free)
Print the 2017 webinar brochure here.
See you online!
Posted by Geoff at 2:53 PM