Sometimes referred to as the twentieth centuries “Forgotten War” The Korea War has been overshadowed by the larger conflicts both before and afterwards-namely World War II and Vietnam. This lecture focuses on numerous genealogical records covering this military conflict including Official Military Personnel Files, Morning Reports, after action records, and records of casualties and prisoners of war. Although only lasting 3 years where communist and capitalistic democratic forces staged war against each other; this conflict would not be forgotten as it caused tensions between the participants for decades after the fighting stopped.

The conflict of the Vietnam War sometime referred to as the Second Indochina War pit the communist supported area of North Vietnam against the United States backed region that would become South Vietnam. This conflict would follow the earlier First Indochina War that witnessed fighting between the French and their neighbors in North Vietnam. The Vietnam War is recognized as being waged in Vietnam, Laos, and Cambodia between 1955 and 1975 with the fall of Saigon and the United States officially removed from the fighting. This lecture focuses on genealogical and historical materials to finding ancestors who fought during this conflict. 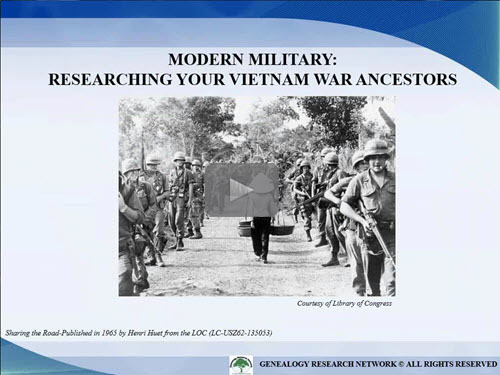 Michael L. Strauss, AG, an Accredited Genealogist and forensic investigator, is a native of Pennsylvania and a resident of Utah. He holds a BA in History and is a United States Coast Guard veteran. He is a licensed Private Investigator and qualified expert witness in Surrogate Court and Circuit Court in Pennsylvania, New York, New Jersey, and Virginia. Michael is an approved genealogist with the United States Army to locate DNA qualified persons MIA from Korea, Vietnam, and World War II. He is a national genealogical lecturer and instructor for military courses at the Institute of Genealogy and Historical Research (IGHR), and Virtual Institute of Genealogical Research (VIGR). He was the film historian for the 2015 Academy Award nominated movie "Finding Vivian Maier".
See all the webinars by Michael Strauss in the Legacy library.
Not a member yet?Legacy Family Tree Webinars provides genealogy education where-you-are through live and recorded online webinars and videos. Learn from the best instructors in genealogy including Thomas MacEntee, Judy Russell, J. Mark Lowe, Lisa Louise Cooke, Megan Smolenyak, Tom Jones, and many more. Learn at your convenience. On-demand classes are available 24 hours a day! All you need is a computer or mobile device with an Internet connection.
Subscribe today and get access to this BONUS members-only webinar AND all of this:
It's just $49.95/year or $9.95/month.

Look at our lineup of speakers for 2019! All live webinars are free to watch.
Print the 2019 webinar brochure here.
Posted by Legacy Family Tree at 4:53 AM