How Do You Find Irish Palatines in Canada? 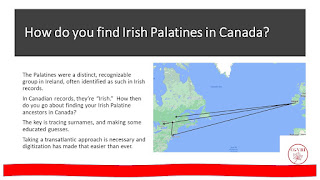 In 1709, after a bitterly cold winter that saw the devastation of their farms and vineyards, more than ten thousand people from the German Palatinate travelled up the Rhine and sailed to England.  A third of these people, all Protestants, were sent to Ireland where they formed a unique enclave amidst the larger Catholic population.  Over time, they lost their German identity and became Irish, and like the Irish, they immigrated to British North America in droves.  They were instrumental in bringing Methodism to the New World and adapted well to their new country.  What made them stand out in Ireland—their German customs, their Protestantism within a largely Catholic country—were no longer distinctive once they settled in Canada.  They immigrated to Canada as “Irish” people, not “Irish Palatines,” and they melted into a Canadian identity like other British and European immigrants.

How, then, is it possible to find the Irish Palatines in Canada when they appear in the records as “Irish”?

The key is tracing surnames.  Most surnames are distinctive—such as Brethour, Corneil, Dulmage, Fizzell, Shouldice, Switzer, Teskey—and for those names that are more common—such as Baker, Lowe, Lawrence, Young—one can often be proven Palatine by association since the Irish Palatines, like most immigrant groups, tended to settle together.  Armed with a knowledge of surnames from the limited settlement locations in Ireland, a researcher can search for those surnames in the usual Canadian genealogical and historical records.

Despite some significant gaps in Irish records, there are two early lists of Palatine families in Ireland, one taken in 1715 and another in 1720.  Additional eighteenth and nineteenth-century records including freeholder lists, tithe applotment books, Griffith’s Valuation, and parish registers provide further evidence of population growth and spread.

Taking a transatlantic approach is necessary not just for discovering names, but also for understanding the local circumstances that drove the Irish Palatines to leave Ireland and immigrate to North America.  From rent increases in the mid-eighteenth century to agrarian violence and famine in the nineteenth, the evidence is found in petitions, outrage papers, estate records and memoirs.

Digitization of key Irish and Canadian records makes the task of following the Irish Palatine immigrants from one side of the Atlantic Ocean to the other that much easier. 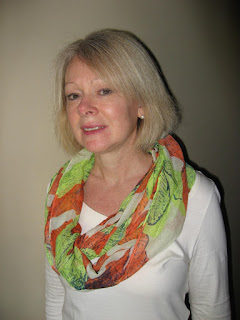 Carolyn Heald authored The Irish Palatines in Ontario:  Religion, Ethnicity, and Rural Migration, and co-edits the Irish Palatine Association Journal.  She is a director of the Ontario Genealogical Society’s Irish Palatine Special Interest Group and a recipient of the Eula C. Lapp Award for significant contributions to Irish Palatine genealogy.
The Irish Palatine presentation is part of Course ONE of the CGVRI.
Registration is OPEN

Posted by Christine Woodcock at 10:59 AM